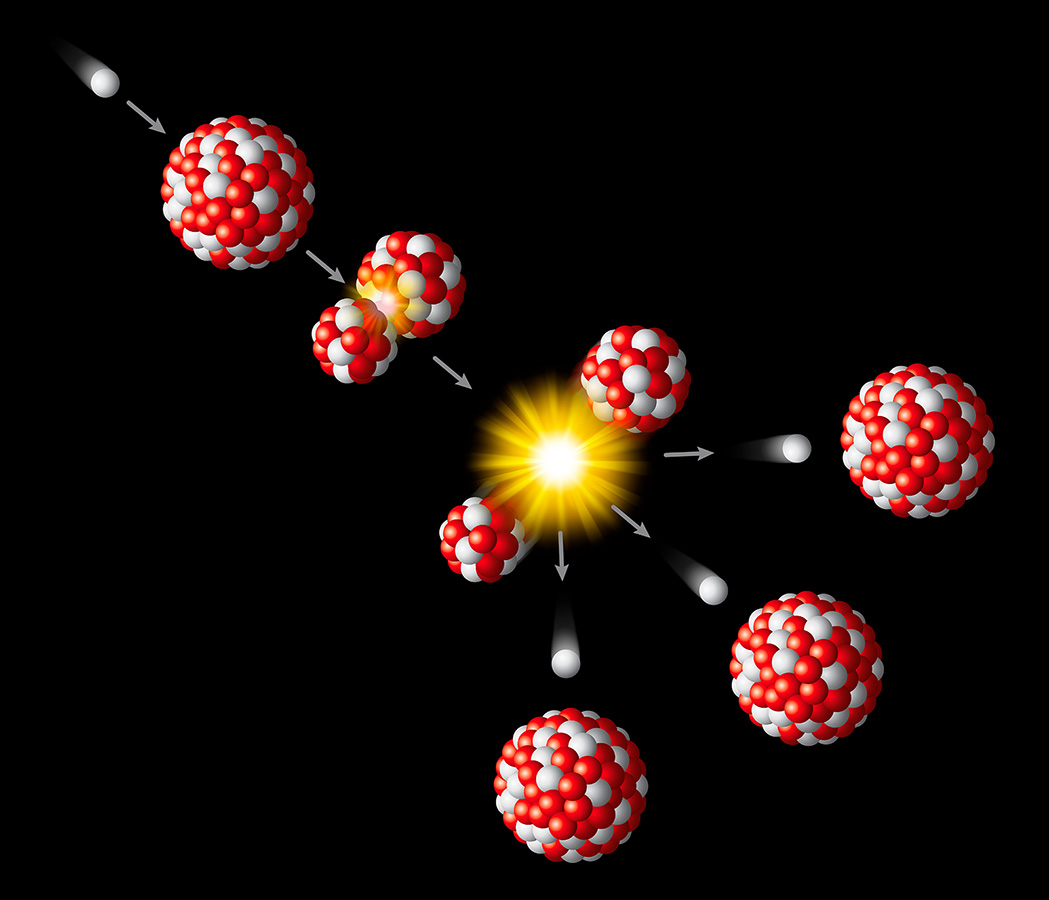 Illustration of a radioactive decay process. The nucleus of an uranium atom splits into smaller isotopes krypton and barium, producing free neutrons and gamma rays and releasing a very large amount of energy. Credit:

When it comes to the U.S. Space Force’s technology wish list, one element comes up on top: “We want higher power in space,” says Space Force Lt. Col. Thomas Nix, an engineer with the Air Force Research Laboratory in New Mexico.

But not just any kind of power.

Nix is the program manager for JETSON, short for Joint Energy Technology Supplying On-Orbit Nuclear Power, within AFRL’s Space Vehicles Directorate. The goal, Nix says, is to survey existing nuclear technologies and then contract with industry toward building a prototype of “a spacecraft that has a fission power source” for flight testing.

Fission-powered satellites would free military planners from constantly worrying about the position of a spacecraft’s solar arrays relative to the sun, Nix says. Also, solar arrays deliver constant but limited wattage, and this electricity must be stored in heavy batteries. Fission reactors can vary their output to potentially deliver additional electrical power when needed to drive more powerful sensors and instruments without the need for batteries.

“Today, if we need a higher power, you have to either scope the higher power into the solar panel design,” Nix says, “or you have to carry batteries to store that power and then push it to the electrical system.”

Nuclear fission could also provide long-term stability for surveillance satellites that would otherwise lose power over time as their solar panels degrade, he adds.

JETSON is expressly not a nuclear propulsion program, however. NASA is exploring nuclear electric propulsion, in which electricity is generated to drive an ion thruster, while DARPA’s Demonstration Rocket for Agile Cislunar Operations program, or DRACO, is focused on nuclear thermal propulsion, in which a fission reactor heats and expels propellant from a spacecraft. “We got a briefing from them on that,” Nix says, “and we didn’t feel that we needed to duplicate any of their efforts.”

But DRACO and NASA might benefit from JETSON’s work on fission, while the Space Force could make use of nuclear electric ion thrusters from NASA.

JETSON is not starting entirely from scratch; compact fission reactors have been a part of U.S. naval vessels for decades. But a seagoing reactor can’t simply be repurposed, say, for a geostationary satellite. “The reactor physics aren’t different,” Nix says, but the Navy doesn’t have to worry as much about “the weight of the reactor itself or the space it takes up.”

The first step under JETSON will be a full review of compact nuclear reactors and their attendant technologies like radiation shielding and thermal couplings, Nix says. Then, later this year, Nix’s team will issue an “advanced research announcement” soliciting industry white papers for ideas about how to integrate reactors, radiators and “all the things to build an actual satellite, minus the payload.”

JETSON is currently funded at $70 million, and Nix hopes that will be enough to proceed through at least preliminary design review — and possibly critical design review — of a satellite powered by a compact nuclear reactor. Additional funds could then be sought for flight testing, or the technology could be handed off to a new Space Force program. Jon covers space for The Independent in the U.K. His work has appeared in Air and Space Magazine, Slate, Smithsonian and the Washington Post.