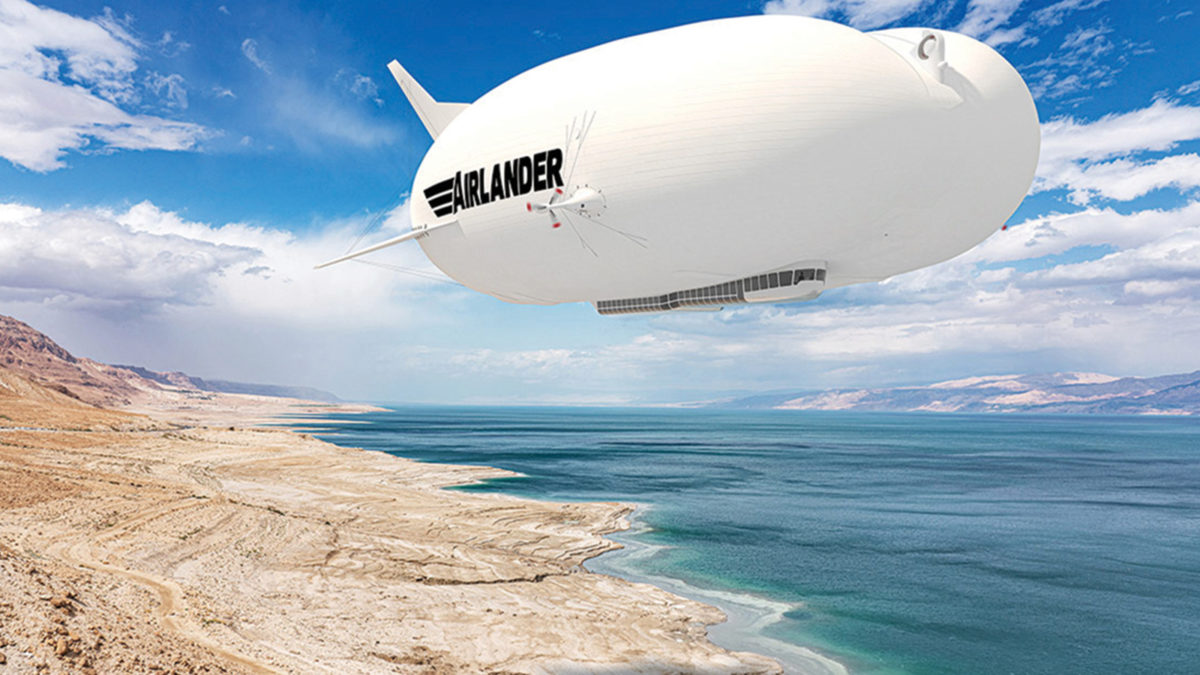 Hybrid Air Vehicles of England moved closer to its goal of equipping its Airlander 10 airship with hybrid-electric propulsion by 2025. The company also unveiled a production version, depicted here, which would differ from the prototype by having a bow thruster, an enlarged payload bay and an envelope with lower drag, among other new features. Credit: Hybrid Air Vehicles Ltd.
⟵ Back to the 2020 Year in Review Landing Page
Aircraft Technology, Integration and Operations

The Lighter-Than-Air Systems Technical Committee stimulates development of knowledge related to airships and aerostats for use in a host of applications from transportation to surveillance.

Rare it is when a new form of propulsion swims into aviation’s ken. Yet in January, Andrew Rae, a professor at Scotland’s University of the Highlands and Islands, announced in Unmanned Systems Technology magazine that he and a team of colleagues had test-flown a prototype drone airship propelled by nothing more than gravity. By so doing, Rae took a recondite concept previously associated with interstellar space travel (“gravity drive”) and applied it to a small robotic blimp.

Rae’s novel system — one of several experiments underway around the world for propelling airships by means other than fossil fuels (e.g., fuel cells, photovoltaic electricity or gaseous hydrogen) — achieves forward motion by making an airship rise and fall: An onboard compressor, powered by solar cells and at night by a battery, pumps air into a bladder inside the blimp’s envelope. Increase the pressure, and the air inside the bladder grows heavier, causing the craft to sink. Reduce the pressure, and the blimp, now lighter, ascends. Controllable pitch, the craft’s aerodynamic shape and a pair of winglets mounted athwart the hull translate these porpoise-like rises and falls into forward thrust. Such craft, says Rae, in theory could remain aloft indefinitely — and at low cost. Rae and his team also investigated the feasibility of building a larger, follow-on vehicle capable of carrying a 100-kilogram payload to an operating altitude of 20,000 meters.

As for other experiments, Britain’s Hybrid Air Vehicles Ltd. moved closer in 2020 to its goal of equipping its Airlander 10 with hybrid-electric propulsion by 2025. In January, HAV announced that hybrid-electric propulsion would give Airlander a 90% reduction in carbon emissions compared to a conventional craft of comparable capacity (90 passengers). HAV also unveiled details of a production-version Airlander, which would differ from the prototype by having such new features as a bow thruster, an enlarged payload bay and an envelope with lower drag.

In February, opposition politicians in Quebec questioned the wisdom of the province’s having invested $30 million in French airship-maker Flying Whales, whose heavy-lift airship would be powered by hybrid-electric engines; one representative asked if the decision perhaps had been made by someone “inhaling helium.”

Goodyear, in the latest iteration of its 100-year relationship with Germany’s Zeppelin company, in May introduced a conventionally powered Zeppelin-made advertising airship for Europe — Goodyear’s first in 12 years.

August marked the 125th anniversary of a flight that should have been impossible but was witnessed by thousands: A reporter for the New York World ascended from the Brooklyn Navy Yard in a one-man, pedal-powered dirigible designed by Carl Myers of upstate New York. After demonstrating to a cheering crowd that he could navigate both with and against the wind, he waved goodbye and pedaled the length of Manhattan Island, landing eventually in Yonkers.

On a more somber note, Oct. 5 marked the 90th anniversary of the crash and immolation of R101, the ultimate expression of Britain’s imperial airship ambitions of the 1930s. A six-month, multimedia exhibit in the U.K. at Cardington, R101’s former base, will commemorate this tragic tale of “flight and fantasy, exploration, greed and folly.”