A British F-35B on the deck of HMS Queen Elizabeth in United Kingdom waters in January, the first time fighter jets had operated from a British carrier in home waters in a decade. Credit: British Royal Navy
⟵ Back to the 2020 Year in Review Landing Page
Aircraft Technology, Integration and Operations

The V/STOL Aircraft Systems Technical Committee is working to advance research on vertical or short takeoff and landing aircraft.

Lockheed Martin began the year with a $35 billion contract for short takeoff and vertical landing, conventional takeoff and landing and carrier variants of the F-35 aircraft. As of early November, Lockheed Martin had delivered more than 585 F-35s, which are operational on 26 bases around the world.

According to Lockheed Martin news releases, the F-35B short takeoff and landing capabilities attracted international customers based on initial users’ experiences, including the F-35B’s ability to take off from the deck of an amphibious warship or from austere, expeditionary locations. The U.S. Marine Corps — the first military service to declare initial operational capability of the aircraft in 2015 — was the first U.S. military branch to employ an F-35 in combat during operations over Afghanistan in September 2018.

The United Kingdom also achieved F-35B program milestones in 2020. In January, the Royal Air Force’s 617 Dambusters Squadron participated in the multinational combat exercise Red Flag at Nellis Air Force Base in Nevada. In January, the first operational U.K. F-35Bs arrived aboard the HMS Queen Elizabeth, the lead ship of the Royal Navy’s new Queen Elizabeth aircraft carrier class, to begin carrier qualification flights. A second carrier qualification period occurred in June, during which British F-35B pilots set a record for the number of sorties flown from the Queen Elizabeth.

The U.S. Army Future Vertical Lift initiatives continued with flight testing this year. Joint Multi-Role Technology Demonstrator demonstrators, including Sikorsky’s SB>1 Defiant compound helicopter and Bell’s V-280 Valor tilt-rotor, have been accumulating flight time since 2018. The first demonstrator to fly was the Bell tilt-rotor design in December 2017; Sikorsky’s SB>1 has been flying since March 2019, exceeding 200 knots in October. In March, the Army announced that Sikorsky and Bell received contracts to each build a prototype of its future attack reconnaissance aircraft. Sikorsky will use its coaxial rotor S-97 Raider compound helicopter demonstrator as the basis for its offering. Bell will use a semi-compound configuration based on the drive train of the commercial Bell 525 helicopter.

Large electric vertical takeoff and landing passenger and cargo aircraft — typically autonomous vehicles for private, military or commercial applications — continued to advance, with more than 300 eVTOL concepts being studied by midyear. The number of designs appearing every year keeps the public engaged on this exciting new form of transportation, which takes advantage of distributed electric propulsion VSTOL technology. One such multi-engine eVTOL vehicle, the Airbus A3 Vahana, concluded its flight test program in November 2019. The flight test team, which started its test operations in 2016 and conducted more than 130 flights, will pass on lessons learned to Airbus’s follow-on test vehicle, CityAirbus.

NASA’s pilotless Mars Ingenuity helicopter, a VSTOL vehicle, began its trip to the red planet in July. Ingenuity will explore the Jezero Crater, its intended landing zone on Mars. It will be a momentous event for the VSTOL industry and the culmination of 224 years of vertical flight progress, which begun with the vertical flight ideas of Sir George Cayley in 1796. 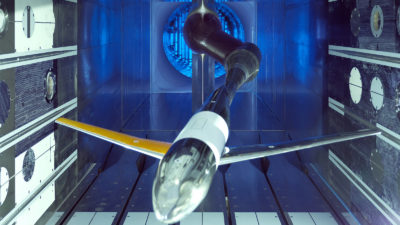