This computational fluid dynamics pressure plot shows the variation in pressure around an aircraft’s engine and wing during what would be a potential loss of control event. The flight conditions reflect an angle of attack of 30 degrees, a speed of Mach 0.6 and zero slideslip. Credit: NASA
⟵ Back to the 2018 Year in Review Landing Page
Propulsion and Energy

The Inlets, Nozzles and Propulsion Systems Integration Technical Committee focuses on the application of mechanical design, fluid mechanics and thermodynamics to the science and technology of air vehicle propulsion and power systems integration.

NASA’s Glenn Research Center in Ohio conducted a simulation study of installed jet engine performance at unusual aircraft attitudes, such as those that might be encountered leading up to and during a loss of control event. This sensitivity study was part of the FAA-mandated Safety Enhancement 209, which aims to improve pilot stall recognition and recovery through more realistic simulation of stall events during flight simulator training.

NASA’s role in this study was to define aerodynamic model parameters — along with their availability and associated uncertainties — necessary for replicating full-stall flight characteristics of various transport aircraft models. The research focused on a T-tail regional jet aircraft configuration, with the turbofan engines mounted to the fuselage, above and behind the wing. As a result of this positioning, the airflow into the engines has the potential to become distorted as angle of attack, or AOA, and sideslip increase causing the ingestion of wing wake and flow blockage due to the fuselage. To capture this interaction, computational fluid dynamics analysis was used to visualize the total pressure disk at the engine inlet at a variety of altitude, Mach number, AOA, and sideslip conditions; this was completed in September. In October, these total pressure values were used as input to a dynamic parallel compressor turbofan engine model, in which the fan and compressor are each divided into four circumferential segments that extend axially to the bypass nozzle and the combustor, respectively. Simulating the engine with the given inlet conditions provided a way to approximate the effect of inlet distortion and reduced airflow on thrust performance and stability. The use of a dynamic engine model offered the option of regulating either fan speed or engine pressure ratio (the two most commonly controlled variables in turbofan engines) and comparing the results to determine if controller selection causes closed-loop behavior to differ at high AOA and sideslip. The simulation also included the capability to model engine degradation related to use, which has an impact on stability and provides an additional source of uncertainty.

Over the first half of 2018, the performance and operability of a first-of-its-kind embedded boundary layer ingesting inlet/distortion-tolerant fan, or BLI2DTF, propulsor were established based upon test data acquired in the transonic test section of the 8-foot-by-6-foot Supersonic Wind Tunnel at Glenn. It was reported in January and further in June, based upon analysis of the test data, that the BLI2DTF propulsor achieved a mass-weighted inlet total pressure recovery from free stream conditions of 96.5 percent and fan stage efficiency of 87.9 percent with nearly 12 percent stability margin. These performance levels support the independently corroborated BLI2DTF system study that identified a five-propulsor fuel burn reduction of 3 to 5 percent and up to 10 percent through the inclusion of additional propulsors to ingest more of the studied commercial hybrid wing body aircraft’s boundary layer. Aeromechanics measurements were also reported that established the robustness of the propulsor throughout the matrix of tested conditions as well as through a rapid speed change test sequence. Designed by United Technologies Research Center with contributions from NASA and Virginia Tech as part of a larger program led by NASA, this technology is applicable to a variety of future aircraft types and propulsor installations.

Image: This computational fluid dynamics pressure plot shows the variation in pressure around an aircraft’s engine and wing during what would be a potential loss of control event. The flight conditions reflect an angle of attack of 30 degrees, a speed of Mach 0.6 and zero slideslip. Credit: NASA 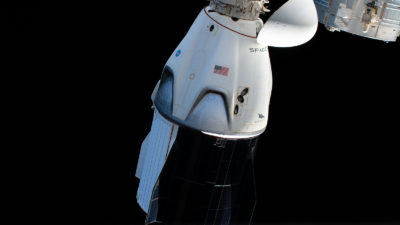