NOAA’s newest geostationary weather satellite reached orbit in November with a camera that promises to deliver four-times sharper spatial resolution, an event that was once expected to mark the start of a revolution in weather imaging. That distinction ended up going to the Japan Meteorological Agency, which launched a nearly identical camera in 2014 on its Himawari 8 satellite and a second one in 2016 on Himawari 9.

The Japanese satellites stare down on Asia from an altitude of 35,000 kilometers over the equator, much as NOAA’s Geostationary Operational Environmental Satellites, or GOES, look down on the continental U.S. and broad expanses of the Pacific and Atlantic oceans. The two GOES spacecraft that do that today (plus a spare in orbit) were joined in November by the most powerful geostationary satellite ever launched for NOAA. It was called GOES-R during construction and then renamed GOES-16 after the launch, as is standard practice. This satellite and its most important payload, the Advanced Baseline Imager, will undergo about a year of testing.

This is the story of how the country that developed this new imaging technology became the second to deploy it. It’s an account of hard choices, some good fortune, and lots of difficult engineering challenges as NASA and its contractors struggled to get GOES-R into space for NOAA in time to prevent any risk of an interruption in coverage. The spacecraft is the first of four next-generation satellites that should keep forecasters busy through at least 2036. GOES-S is scheduled for launch in early 2018, followed at some point by T and U.

NOAA is not displeased with how things have turned out. The National Weather Service put a three-year launch delay to good use by receiving data from the Japanese versions of the camera and testing the forecasting models in advance of the GOES-R version, called the Advanced Baseline Imager.

ABI collects reflected light and passes it through a filter and then to a focal plane array made up of individual detector elements. These convert the light into electrical signals. ABI has 16 filters, one per spectral band, each backed by its own array of detector elements.

In addition to the four-times better spatial resolution, ABI will generate pictures five times faster than today’s GOES Imagers. The plan is to scan and then focus in quickly on interesting or potentially dangerous weather features. ABI will “scan from the North Pole all the way down to the South Pole” in five minutes compared to 27 minutes for the existing GOES Imagers, says Greg Mandt, NOAA’s GOES-R program manager. “In addition, we’ll have the ability to zoom in on a specific storm, like a tornado-spawning complex or a hurricane and look at it every 30 seconds, thereby revolutionizing our ability to forecast weather in near real time.”

NOAA and NASA were fortunate that the existing GOES satellites stayed healthy during a series of delays attributable partly to the need to perfect the required technologies. In 2010 and again in 2015, the U.S. Government Accountability Office, the auditing arm of Congress, warned that the age of the existing GOES satellites created a risk that NOAA might end up without a backup in orbital storage. If the satellite in the GOES-East or West slot were to fail, the backup would have to be shifted to take over its duties, leaving NOAA without a second string. That fear did not come to pass. GOES-15, which is in the GOES-East slot, and GOES-13 in the GOES-West slot continue to operate normally, as does the backup, GOES-14, providing plenty of time for testing GOES-16 (formerly GOES-R).

The quantum leap in capability expected from GOES-R did not come cheaply or without painful decisions for those at NOAA who were determined to modernize severe weather forecasting.

Today, ABI is the heart and soul of GOES-R, but the original plan called for a second instrument that was seen by many as equally important, even if it did not deliver photographs. It was called the Hyperspectral Environmental Suite. HES would have vertically profiled the temperature and humidity of the atmosphere in front of storms much faster and with more precision than the existing GOES Sounders. The instrument was called a suite because it also would have measured coastal water properties, including turbidity, temperature and algae concentrations. The forecasting community was ecstatic about the idea of HES. In 2004, NASA, in its role of managing the acquisition for NOAA, awarded HES design study contracts worth $20 million each to three companies: ITT (Now Harris Geospatial Solutions in Indiana), Ball Aerospace of Colorado and BAE Systems of Virginia.

Then came a major budget scrub, one in which NOAA applied a new, more rigorous approach to cost estimating. In 2006, NOAA concluded that if it built every feature of GOES-R in its plan, the program’s cost would climb from about $7 billion to roughly $11 billion. NOAA canceled HES that year, citing its technical risks, and reduced the number of satellites to be purchased from four to two, although two have since been added back.

In scrapping HES, NOAA sacrificed what researchers had touted as an improved ability to identify atmospheric changes that might be precursors to severe storm formation. The best NOAA can say now about GOES-R is that it won’t lose any ground to today’s GOES Sounders. Mandt explains that the infrared channels on ABI, coupled with the faster measurement pace, will effectively replicate the capability of those sounders.

One question about HES was the enormous computing power that would have been required to make sense of its more than 1,000 bands of data. That capability exists today, but in the early 2000s, processing power had not yet reached the point of being able to digest the massive data load that would have been generated, says Paul Griffith, Harris’ chief engineer on ABI. He watched HES closely for lessons that might be applied to ABI.

Another factor may have been the new estimating process. In Mandt’s view, the higher estimate for GOES-R stemmed not so much from surprising program difficulties, but from this more rigorous cost-estimating process. HES was a casualty of that, he says.

With the GOES-R mission now hinging almost entirely on ABI, all eyes were on that project as engineers broke new ground in instrument design and manufacturing. Along the way, the nameplate of the company would change twice. The work on ABI was begun by ITT Space Systems in Indiana, which in 2011 was spun off into a new company, Exelis, and renamed Exelis Geospatial Systems. Then, in 2015, Harris Corp. of Florida bought Exelis.

The four-fold increase in spatial resolution was achieved, in part, by adopting photo-voltaic detector elements, which convert light photons differently from the photo-conductive elements used in the GOES Imagers on today’s satellites. The goal was more stable performance and a higher signal-to-noise ratio, Harris says.

The ABI detector elements are made of the same materials as on other satellites: silicon for some spectral bands, but the alloy mercury cadmium telluride for most. “It’s the same material” as in today’s GOES Imagers “but a different architecture,” Griffith says.

Despite being laid out on a flat focal plane, each detector element is a complex three-dimensional structure created by a process that involves vapor deposition, etching and ion deposition. The size of the detector elements coupled with their internal structure defines their performance. Computer-driven manufacturing techniques enabled Harris to optimize these features, Griffith says. The detectors had to be produced in large dimensions and in the desired numbers without sacrificing quality. There were hiccups. The initial focal planes didn’t have the expected quality and had to be redone.

All told, the ABI arrays provide an exponential increase in the number of detector elements compared to the GOES Imager, with the exact increase varying by spectral band.

Improvements in ground processing were also made, so that the ABI images could be resampled, a technique that applies algorithms to display picture elements in a larger format.

Normally, optical engineers increase resolution by increasing a camera’s aperture, so more photons are collected. Harris managed to increase the spatial resolution four-fold with a telescope aperture that’s slightly narrower than that of the existing GOES Imagers: 27 centimeters vs. 30 centimeters.

This breakthrough work turned out to be more expensive than planned. In a 2010 report, GAO said that NASA and the ABI contractor underestimated the complexity of two ABI components: the focal plane array and its telescope. As a result, the program’s projected cost rose from $375 million to $537 million, the GAO said.

Griffith recalls the problem vividly. Stray photons were entering the telescope, and this was resolved by adding baffles to the structure, he says. Some manufacturing troubles were encountered too, he adds.

Harris’ original contract value for the ABI, including development, a prototype and two flight units, was $255 million, Harris says. The company has not released the final value that would reflect two additional flight units, changes in government requirements and some cost overruns.

Another cost factor entirely separate from ABI was development of the GOES-R, Geostationary Lightning Mapper, one of five secondary sensors on the satellite, the others focused on space weather. Its cost rose from $71 million to $157 million, the GAO said.

Griffith concedes that there were moments during ABI’s development when it looked like there were no solutions to some of the problems, particularly with the telescope. Ultimately, engineers were able to work everything out.

The ABI contractor ended up delivering the first of the new breed of instruments to NASA about a month before shipping the first Advanced Himawari Imager, or AHI, to Japan for Himawari 8. GOES-R took two years beyond that to reach orbit for a variety of reasons.

One is that it is larger and more complex than Himawari, weighing in at 5,192 kilograms, with fuel, compared to about 3,500 kg for Himawari 8. And while ABI was the most important sensor on GOES-R, managers also had to wait for the other sensors to be delivered and integrated, Griffith says, whereas AHI is the only sensor on each Himawari satellite. Harris is under contract to supply a similar sensor for a South Korean weather satellite slated to launch in 2018.

Not all of the issues had to do with the instruments. As an example, Lockheed Martin Space Systems in Colorado, which built the first GOES-R satellite and is on contract to deliver three more, discovered faulty transistor parts in the satellite. The bad parts, in the Scalable Power Regulator Units, could have prevented GOES-R from charging and discharging its batteries properly, NOAA told lawmakers in late 2015. The parts had to be replaced. This was among the factors that caused the satellite to miss its spot in the busy launch manifest at Cape Canaveral. The launch was bumped from March 2016 to October and finally November.

That’s all history now. Once testing of GOES-R is complete, and this first satellite starts operating, the more accurate forecasts could take some getting used to for average Americans. “When I’m at home, and Fairfax County [Virginia] gets a tornado warning, you know what I do? I open my front door to see if I can see it,” Mandt says. “We all have heard so many warnings that we don’t believe it,” he says. With GOES-R, fewer false warnings are expected. “When they hear one they’re going to go to safety.”★

"We’ll have the ability to zoom in on a specific storm, like a tornado-spawning complex or a hurricane and look at it every 30 seconds, thereby revolutionizing our ability to forecast weather in near real time."

Data from NOAA’s Geostationary Operational Environmental Satellites is too voluminous to be fully processed aboard them. It’s sent to the ground for processing and then back up to the satellites, which broadcast it to participating companies or institutions. 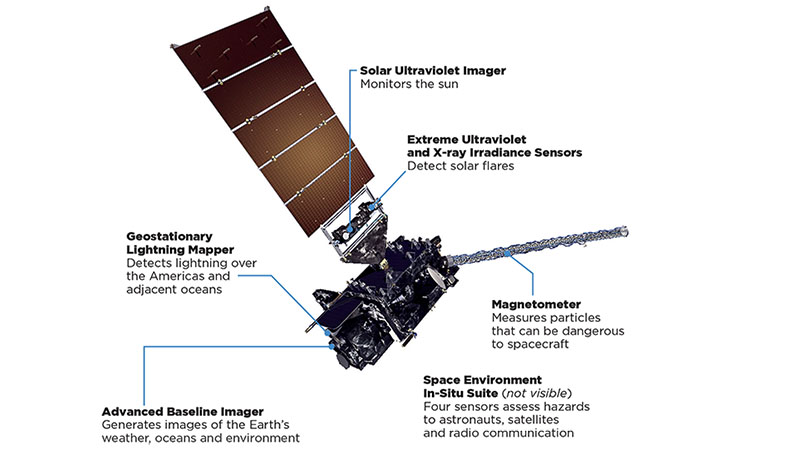