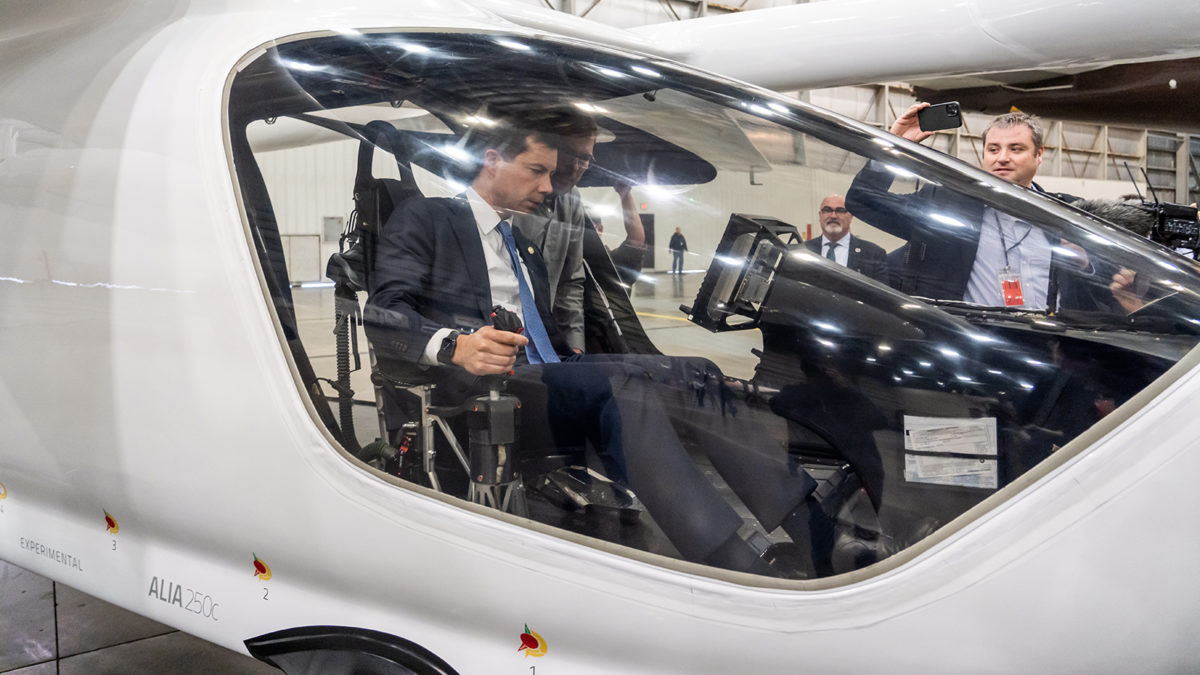 Beta Technologies in December completed the second multileg journey of the year with its Alia SN1 electric aircraft. The six-day journey ended in Louisville, Kentucky, where U.S. Transportation Secretary Pete Buttigieg got an up-close look at the aircraft. Credit: Beta Technologies

Beta Technologies’ piloted test flight from upstate New York to a cargo warehouse in Louisville, Kentucky, that concluded in early December required minimal special accommodations or airspace clearances, prompting one of the pilots on the journey to say such flights have become routine.

Lochie Ferrier, a pilot and engineer with the Vermont-based company, was one of two flyers who alternated in the cockpit during the six-day journey that began in late November and covered 1,410 kilometers. Beta has a Special Airworthiness Certificate from FAA, which allows demonstrations and crew training.

“We were able to move it across the country in real winter weather, which is pretty brutal flying weather, in a fairly short time,” Ferrier says.

The SN1, with an empty cargo hold, carried only its pilot.

The primary purpose of the flight was to position the aircraft at a United Parcel Service cargo facility so that UPS could show it to U.S. Transportation Secretary Pete Buttigieg, whose agency includes FAA, during his scheduled tour there on Dec. 6. UPS says it intends to purchase 150 Alia aircraft starting in 2024, but Beta has yet to receive FAA type certification.

Buttigieg viewed the aircraft at Louisville Muhammad Ali International Airport. Beta says he spoke with founder and CEO Kyle Clark about electric aviation, the journey to Louisville and the company’s propulsion system and charging infrastructure.

A secondary purpose was to continue learning about Alia’s systems, especially battery recharging during long flights. During the flight, a snow shower in New York grounded the flight for a day and a half.

“It’s an experimental aircraft, so we treat these prototypes with kid gloves, and we eliminate as much weather risk as possible,” Ferrier says.

The SN1, an electric vertical takeoff and landing aircraft, has a lift-plus-cruise configuration with four vertical lift rotors and a single rear propeller for forward motion. But Beta pilots flew the aircraft in conventional mode to Louisville, with the vertical lift rotors locked in aerodynamic position. Beta says that’s because its current focus is proving battery performance and charging throughout longer-range flights.

Ferrier says the biggest lesson learned was how to smoothly recharge the plane, which was done by Beta pilots and other employees. Twice, batteries were recharged in less than an hour. The longest charge period was just over two hours. In most cases, charging was done at permanent stations established by Beta, although temporary charging stations were deployed three times.

As for the actual flight, Ferrier says the Alia is relatively easy to fly, compared to the Cessna Caravan chase plane that also made the journey.

“You basically take off and set the power for cruise, and then all we’re doing is holding an altitude and navigating to where we want to go,” he says. “We’re not up there fiddling with how many electrons are flowing into the motor or something.”