Material extruded from a 3D printer (white disk at lower center) represents part of a solid fuel cylinder with a star-shaped hole, or bore. TNO, based in The Hague, built the printer. Credit: TNO

Solid-fuel rockets contain cylinders of fuel that, depending on the manufacturing method, can take weeks to cure. Plus, it’s complicated to design the fuel so that the propulsive force varies in a predictable way as it burns. Keith Button spoke to researchers who think they have a better way to make solid fuel.

Researchers in the Netherlands learned a rough lesson when they first tried 3D-printing solid fuels like the conventionally cured kind that today power everything from rocket-propelled grenades to space launch vehicles.

The researchers were determined to master the technique because it would speed production compared to conventional methods and give designers new options for tailoring a rocket’s propulsive power to their needs.

Working with explosive materials is tricky. Early on, the researchers chose to melt solid propellant, so it could be laid down as a liquid a layer at a time in the 3D-printing process. In one attempt, the chemical was held at the melting temperature for too long and started to decompose. You can probably guess what happened.

“Bye, bye printer,” says Joost van Lingen, a physical chemist with the Dutch scientific research group TNO in The Hague. He leads the solid-fuel 3D-printing project for TNO, a Dutch acronym for the Netherlands Organization for Applied Scientific Research.

The researchers haven’t blown up any printers since that day in 2012, but they still have more to learn. If a new mixing process works as well as hoped in an experiment that was scheduled for March, the researchers will have achieved another step toward that goal.

The attraction of 3D printing is that it gives more precise control over the ratio of ingredients in the fuel. That ratio is crucial, because it’s one of the factors that determine how fast a cylinder of solid fuel will burn inside its rocket casing. Another factor is the shape of the bore hole in the center of the cylinder. This is where the fuel ignites and burns outward from the interior walls of the cylinder.

Today, these cylinders are made either by casting, which can require weeks of curing time, or by extruding paste through a die with a shorter curing time. A flammable/explosive material, typically ammonium perchlorate, is mixed into the fuel as a confectioners-sugar-like powder while the fuel is still in its liquid state. The greater the number of grains of that powder in a cubic centimeter, the faster it will burn.

These conventional methods make it hard for designers to vary the burn rate and therefore the propulsive power of a solid rocket as it burns. Engineers typically must elect to distribute the material uniformly to produce a consistent and predictable burn rate.

With 3D printing, the percentage of that energetic material can be concentrated at certain points in the cylinder and made less concentrated at others. This is done by controlling the ratio of ingredients in each pixel, or dot, in the cylinder as the 3D printer builds it a layer at a time, sort of like stacking compact disks. Pre-determined variations in power would be handy if a space launch called for greater acceleration at a certain point in its flight and less acceleration at another point, for example.

Today, the rate of burn is controlled almost solely by the shape of the bore hole. If one looked down from above, the hole might look like a star, for example. In that case, the more points on the star, the greater the surface area, the faster the burn rate and the more propulsive power. But as the fuel burns from the center out, the initial star morphs into a circle that grows larger and larger. This surface area then dictates the propulsive power through the remainder of the flight.

With a 3D-printed cylinder, even after the star points are gone, the power can vary because of the varying concentrations of energetic material at different locations.

Today, complex bore shapes are difficult to make, but they would be fairly easy to produce with 3D printing. Burn profiles could be tailored to specific missions and payloads by varying the concentrations of material and also by varying the number of star points or turning to other shapes.

The advantages of 3D-printed solid fuel might convince small-satellite launchers to switch from liquid-fueled rockets, says John Zevenbergen, TNO’s principal investigator for advanced energetic materials. Solid fuel is simpler and less expensive than liquid fuel in general, he notes, and now there would be added advantages.

The researchers are still refining their recipe and processes, though. For the March experiment, the TNO researchers were planning to 3D-print fuel with a mix of two pastes containing different concentrations of energetic powders. The researchers long ago moved away from the melting process that caused the boom in 2012. The ratio of these two pastes can be varied to alter the concentration of energetic material in the final product, says Michiel Straathof, a space propulsion engineer and lead researcher on the 3D-printing project. To achieve this, two syringe-like extruders mix the two pastes together as they are pushed out through a 1-millimeter nozzle. The ratio of one to the other is determined by the amount of pressure exerted on one syringe relative to the other. A doughnut-shaped ring around the nozzle points ultraviolet light at the mixture as it is deposited, one thin disk-shaped layer at a time, hardening it. This 3D-printing method is called fused deposition modeling, or FDM.

When TNO began the project, one of the first hurdles was finding a material that had enough energetic ingredients to perform as a fuel but could be printed without blowing up, van Lingen says. At first, they tried melting energetic materials (ammonium dinitramide and TNT) that were deposited on a surface for curing. After the boom and some more experimentation, they eventually settled on methods where the energetic ingredients could be added as a powder. They started with a mixture that they knew contained enough energetic material and then tested whether it would flow through the nozzle and be controlled on the printing surface.

The energetics group worked with chemists in TNO’s 3D-printing group to come up with an initial mix and then refined the recipe through trial and error, Straathof says. Their goal is a solid fuel that meets industry flexibility and tensile strength standards, with the required propellant distribution of the grains of powder in a given sample size as checked with a scanning-electron microscope, plus a stable shelf life of 20 to 25 years.

The researchers settled on the syringe-based technique for printing because it could extrude a highly viscous liquid, up to 85 percent of which was the energetic material added in powder form. A plasticizer, also an energetic material, added flexibility to prevent cracking in the solid form. A binder ingredient solidifies the paste when exposed to the UV light.

The researchers also had to consider safety requirements in their design for the printer. The energetics experts on the TNO team reminded their colleagues that for everyone’s safety the printer would have to operate alone in a reinforced-concrete bunker.

The remote-control requirement and remote viewing for all aspects of the machines was a new concept for the 3D-printing group that forced members to think differently, Straathof says.

In their previous work with nonenergetic materials, “they put [the materials] in a machine and they stand next to it and they see what happens,” he says. “Of course, we can’t do that. We have to load the machine, and we close the bunker door, and then everything is remote.”

For starters, everything on the printer had to be monitored by software and cameras. Two small cameras watched the printer nozzle and printing surface, while a wide-angle camera viewed the whole printer. The software would monitor the status of the printer, including the temperature and pressure in the extruders, Straathof says.

The TNO team designed software that would cut the power to the printer if the temperature or pressure climbed higher than a threshold that could induce an explosion or fire. A redundant fuse would break if the software didn’t work. Motors were not allowed to produce more torque or pressure than what was needed for extrusion. If the power was cut to the printer, a brake would automatically engage to prevent the printer nozzle from falling hard on the printed material.

The motors that push the plungers in the extruders had to be monitored to make sure that none of the propellant material dried up. In normal 3D printing, the biggest problem might be getting plastic stuck in a motor and having to replace the motor. “In our case, if you have dry powder in the motor, where it’s exposed to friction, it can lead to a problematic situation,” such as an explosion or fire, Straathof says.

Static electricity could be dangerous — every part on the printer that might contact energetic material had to be grounded. And after a print trial, before the researchers could open the steel door to the bunker, the UV light had to be off, the extruder plungers retracted and the temperatures normal. All the precautions and remote observation requirements mean that every trial takes much longer to complete than with typical 3D-printing research.

The energetics and 3D-printing groups would sit together in hourlong sessions to think through all of the possible things that could go wrong and how to prevent them, Straathof says. The final design looked nothing like the initial design that was created by the 3D-printing group before the joint analysis with colleagues in the energetic group.

“In our case, if you have dry powder in the motor, where it’s exposed to friction, it can lead to a problematic situation.” A UV light attached to the printer’s metallic extrusion nozzle (the object resembling a pencil point), cures material as it exits the nozzle through a 1-millimeter opening. Credit: TNO A fused definition modeling printer builds a solid fuel cylinder one layer at a time. This cylinder was stopped in midproduction when the printer ran out of material. Credit: TNO 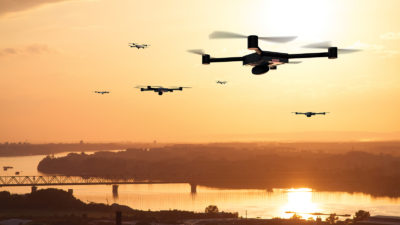