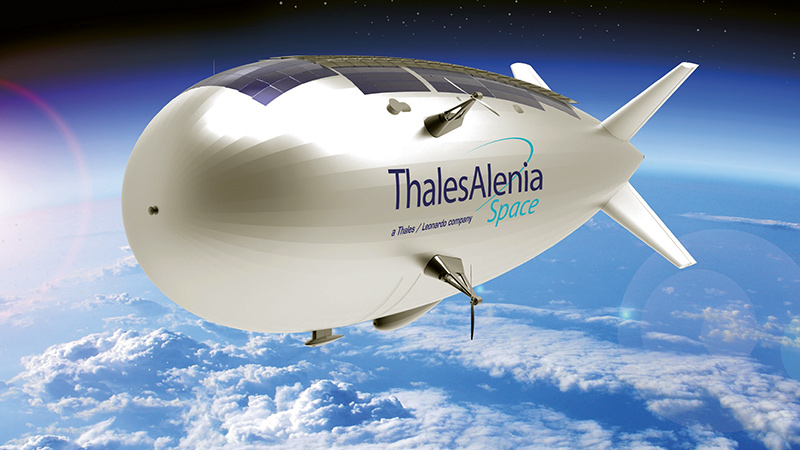 PARIS — The airship market, that tantalizing aviation niche that for decades has failed to pan out in a big way, saw some business maneuvering this week at the Paris Air Show aimed at solving the marketing and technical hurdles that have prevented these craft from seizing roles in transportation, communications and Earth imaging.

Paris-based Hybrid Air Freighters on Tuesday signed a letter of intent to purchase up to 12 hybrid airships from Lockheed Martin subsidiary Hybrid Enterprises. The non-legally binding agreement will be worth approximately $500 million if it leads to an official contract. The LMH-1 hybrid airships, designed by Lockheed Martin Skunk Works, would fly cargo and up to 19 passengers to remote places, said Hybrid Air Freighters CEO Hubert de Contenson during a press conference. These cargo services could include shuttling mining equipment and engineers from site to site in places like Alaska, said Jean-Paul Troadec, Hybrid Air Freighters’ head of aviation and flight operations. He said flights in remote locations could ease the path to public acceptance elsewhere.

Rob Binns, CEO of Hybrid Enterprises, said the company is “close” to finalizing a deal to sell the Skunk Works-designed airships to U.K.-based Straightline Aviation, which last year also announced a letter of intent to purchase 12 of them. Binns predicted that once a full-scale LMH-1 demonstrator starts flying, Hybrid Enterprises could begin delivering airships within 30 months. That would mean 18 months for production and 12 months for flight test certification.

“We have a certification plan agreed with the FAA and Transport Canada,” Binns said during the press conference. “Now we will have to talk further with EASA,” the European Aviation Safety Agency.

The LMH-1 will be a “hybrid” version of a traditional airship, because 80 percent of its lift comes from helium gas buoyancy and 20 percent comes from aerodynamic lift generated by its shape and four propeller engines. The lift from helium should give it an energy-saving advantage over gasoline-powered planes.

Lockheed Martin Skunk Works originally tried to sell the concept to the Army in 2010 as an intelligence, surveillance and reconnaissance aircraft and communications relay for troops in Afghanistan. Lockheed flew a subscale prototype of the hybrid airship in 2006, but was passed over in a contract competition. Lockheed began exploring commercial opportunities for its design and the Pentagon eventually decided not to buy airships.

Shipping freight and broadcasting wireless signals by hybrid airships could one day lead to passenger travel, but first people need to shake off perceptions that they are not safe. Responding to a question about an advertising blimp that deflated, burst into flames and crashed during the US Open last week, Binns suggested that such incidents feed what he called a misconception about safety.

An airship “is far safer than a fixed-wing aircraft,” he said.

The Paris Air Show also saw two French companies forge a deal to create a different kind of airship, one that would stay aloft in the stratosphere for months to provide satellite-type services, including Earth observation and communications. Thales Alenia Space signed an agreement Monday with Airstar Aerospace, a maker of tethered balloons and airships, to acquire an minority stake in Airstar for an undisclosed amount. The companies aim to solve “certain technological roadblocks” with the Stratobus airships that Thales has been developing, Thales said in statement. The goal will be to complete a prototype of the Stratobus by 2020. By floating at 65,000 feet potentially for up to a year, a Stratobus would provide lower latency than telecommunications satellites for wireless signals and could be ideal as a platform for fifth generation, 5G, mobile services , says Jean-Philippe Chessel, head of the Stratobus product line at Thales Alenia Space. Chessel signed the agreement with Airstar Aerospace CEO Romain Chabert.

Airstar’s products include tethered surveillance balloons for military customers including the Eagle Owl, which was also on display at the air show.