Big news! AIAA is updating our brand identity, specifically the AIAA logo, brand colors, and corporate font. Why you might ask? Well, we’ve had this look for a really long time, so long in fact, that nobody on our staff can remember the last time our logo changed, and we have staff members who have been around over 30 years. However, AIAA has changed a lot in the last 30 years. With our members’ help, we’ve launched new member benefits, built an online community, brought the marketplace new collaborative forums, and celebrated countless wins in the aerospace community together, but our logo had lines down the middle. We don’t want lines in between us anymore. Needless to say, it was time for a refresh. Don’t worry, we are not changing our look completely. Our design goal was to adjust just what was needed to solidify the look, and make our logo friendly online, in social media, and in print.

So here is your sneak peek! You’ll see this new logo everywhere you see AIAA—at an event, on our new website (coming early 2019), Facebook, Twitter, and soon you’ll see it incorporated into all of our products as well. We hope this new look shows our members that we are also continually advancing our promise to you to help aerospace professionals and their organizations succeed, even if it’s just a little creative change to make us sharper and more connected. 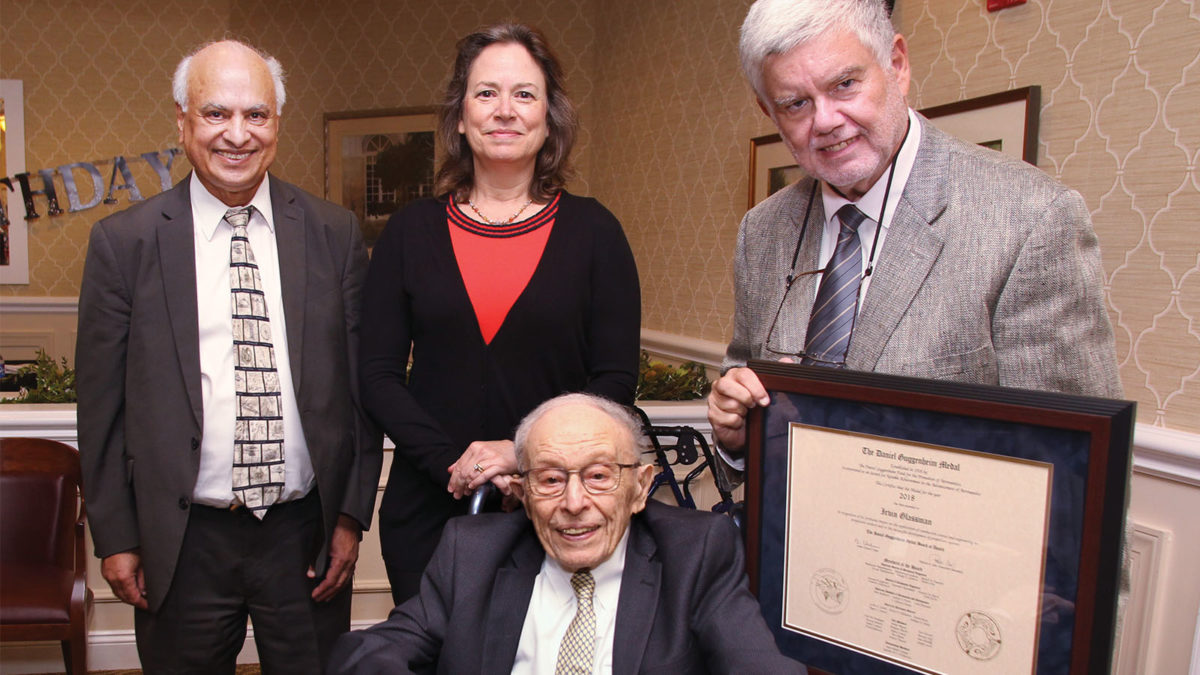 Princeton University Professor Emeritus Irvin Glassman was awarded the 2018 AIAA/ASME/SAE International/VFS Daniel Guggenheim Medal on 18 August “in recognition of his profound impact on the application of combustion science and engineering to propulsion research and the successful development of propulsion systems.”

Known affectionately by his colleagues as the “Grand Old Man of Combustion,” Glassman retired from the Department of Mechanical and Aerospace Engineering in 1999 after 49 years. He received his B.E. (1943) and Dr.Eng. (1950) in Chemical Engineering from Johns Hopkins University before joining Princeton University. Promoted to full professor in 1964, Glassman was appointed as the Robert H. Goddard Professor of Mechanical and Aerospace Engineering in 1988. He is an AIAA Fellow, Member of the National Academy of Engineering, and member of the New York Academy of Sciences. Born in Cusco, Peru, Silva-Martinez attended Rutgers University, where she earned bachelor’s degrees in Mechanical and Aerospace Engineering and Spanish Translation and Interpretation. She went on to earn a Certificate in Lean Six Sigma from Lockheed Martin’s Greenbelt Program, a Certificate in Engineering from Drexel University, a Master’s degree from Embry-Riddle Aeronautical University in Aeronautical Science with a concentration in Human Factors Aviation/Aerospace Systems, and a second Master’s degree in Aerospace Engineering with a concentration in Space Systems Integration from Georgia Institute of Technology. In addition, Silva-Martinez is an alumna of the 2015 Space Studies Program from the International Space University.

An active AIAA member, Silva-Martinez has served as chair of the AIAA Space Architecture Technical Committee’s Habitability and Human Factors Subcommittee, and as a member of the AIAA Young Professionals Committee. She is also active in STEM initiatives, having founded the Centro de Ciencia, Liderazgo y Cultura, which presents lessons on science, leadership and culture to younger generations throughout the world.

Geoffrey Andrews from Purdue University has won the 2018 AIAA Foundation Abe M. Zarem Award for Distinguished Achievement in Aeronautics for his paper “A Hybrid Length Scale Similarity Solution for Swirling Turbulent Jets.” He was invited to participate in the student paper competition of the 31st Congress of the International Council of the Aeronautical Sciences (ICAS).

Andrews is in his second year as a Ph.D. student in aerospace engineering at Purdue where he also earned his master’s degree. He has a bachelor’s degree in mechanical engineering from Lehigh University.

Andrews’s faculty advisor for the winning project was Gregory A. Blaisdell, an AIAA Associate Fellow and a professor in the School of Aeronautics and Astronautics at Purdue University.

Ken M. Mitchell from the University of Memphis has won the 2018 AIAA Foundation Abe M. Zarem Award for Distinguished Achievement in Astronautics for his research paper “Thermal Conductivity and Specific Heat Measurements of an RTV-655/Polyimide Aerogel Compound at 77K and 298K.” He was invited to participate in the student paper competition of the 69th International Astronautical Congress.

A 2nd-year mechanical engineering graduate student, Mitchell also is working in the Bio, Nano, and Space Materials Lab within the Physics Department. He received his undergraduate degree in mechanical engineering at the University of Memphis. Mitchell’s focus in graduate school has been to measure thermal conductivity and specific heat of polydimethylsiloxane (PDMS) and aerogel at room temperature and cryogenic temperature using the transient plane source technique.

Mitchell began working with advisor Jeffrey Marchetta as an undergraduate. Marchetta is a professor of Mechanical Engineering and faculty advisor of the AIAA University of Memphis Student Branch. An AIAA Senior Member, he received the AIAA Abe Zarem Award for Distinguished Achievement in Astronautics Research in 1999.

AIAA Honorary Fellow Dr. Abe Zarem, founder and managing director of Frontier Associates, established the award to annually recognize graduate students, in aeronautics and astronautics, who have demonstrated outstanding scholarship in their field. For more information on the award, contact Felicia Livingston at felicial@aiaa.org or 703.264.7502.

Each academic year the AIAA Foundation presents the Orville and Wilbur Wright Graduate Awards. These $5,000 awards, given in memory of the Wright brothers’ contributions to the evolution of flight, honor full-time graduate students. The winners are:

In addition, Emily Matula, University of Colorado Boulder, Boulder, Colorado, received the Neil Armstrong Graduate Award. This $5,000 award honors the character and achievements of the late astronaut, military pilot and educator, Neil A. Armstrong, the first human to set foot on the moon.

Undergraduate Scholarships for the 2018–2019 Academic Year

For more information on the AIAA Foundation Graduate Awards and Undergraduate Scholarship Program, please contact Felicia Livingston at felicial@aiaa.org or 703.264.7502. Join us as we continue to inspire teachers and students. For more information and to donate, please visit www.aiaafoundation.org.

AIAA Scholarships and Graduate Awards site is now accepting applications for the 2019–2020 academic year. The application deadline is 31 January 2019. For more information, visit us online: aiaa.org/scholarships.